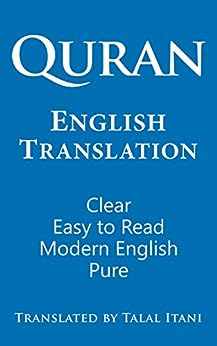 This Quran translation has no interpretations, no footnotes, and no explanations. It is a pure translation of the Quran, from Arabic to English, and it does not try to emphasize any school of thought. The text purely and accurately translates the Holy Quran, from Arabic, into contemporary English.

It was translated by a Muslim, who saw firsthand the miracles inside the Quran. His native language is Arabic; his everyday language is American English. For 15 years, he studied the Quran. For many years, he translated speech between his mother and his wife. For a living, he develops quality software.

Quran Sura 91. The Sun. ash-Shams.
In the name of Allah, the Gracious, the Merciful.
1. By the sun and its radiance.
2. And the moon as it follows it.
3. And the day as it reveals it.
4. And the night as it conceals it.
5. And the sky and He who built it.
6. And the earth and He who spread it.
7. And the soul and He who proportioned it.
8. And inspired it with its wickedness and its righteousness.
9. Successful is he who purifies it.
10. Failing is he who corrupts it.
11. Thamood denied in its pride.
12. When it followed its most wicked.
13. The messenger of Allah said to them, "This is the she-camel of Allah, so let her drink."
14. But they called him a liar, and hamstrung her. So their Lord crushed them for their sin, and leveled it.
15. And He does not fear its sequel.

The Quran is the last Book from the Creator. It contains guidance, mercy, and healing. The Quran is a blessing, within reach.