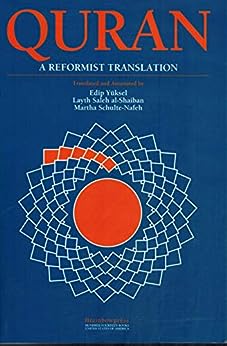 The Reformist Translation of the Quran offers a non-sexist understanding of the divine text; it is the result of collaboration between three translators, two men and a woman. It explicitly rejects the right of the clergy to determine the likely meaning of disputed passages It uses logic and the language of the Quran itself as the ultimate authority in determining likely meanings, rather than ancient scholarly interpretations rooted in patriarchal hierarchies. It offers extensive cross-referencing to the Bible and provides arguments on numerous philosophical and scientific issues. It is God’s message for those who prefer reason over blind faith, for those who seek peace and ultimate freedom by submitting themselves to the Truth alone.

A bold and beautiful translation that serves as a timely reminder to all believers that the Qur’an is not a static scripture, but a living, breathing, ever-evolving text whose sacred words are as applicable today as when they were first uttered by the Prophet Muhammad fourteen centuries ago. REZA ASLAN, CBS News Consultant; Author, No god but God: The Origins, Evolution, and Future of Islam.

A testament to the fact that faith need not suffocate reason. This is bound to be among the smartest of ‘smart bombs’ in the battle of ideas within Islam. IRSHAD MANJI, Fellow, Yale University and author, The Trouble with Islam Today: A Muslim’s Call for Reform in Her Faith.

Every conversation begins with a single voice. This Reformist Translation of the Quran and its ancillary materials should begin many conversations, between and among Muslims and non-Muslims alike. In many parts of the Muslim world this is a dangerous discussion, and sometimes that danger can reach well into the West, as evidenced by the 1990 fatwa-inspired murder of Rashad Khalifa in Tucson, Arizona . It is an important discussion, however, and the editors of this book have assumed this risk to argue for a perspective that sets violence aside both in discourse and living. One can imagine that a broader adoption of their perspective across the Muslim world would reduce strife and invite greater examination of Islam by non-Muslims as something other than a threat. It would expand the conversation. – MARK V SYKES Ph.D. J.D. Director, Planetary Science Institute.

Very Interesting and Timely – RIFFAT HASSAN, Ph.D. Professor of Religious Studies and Humanities at the University of Louisville, Kentucky. A pioneer of feminist theology in the context of the Islamic tradition.

I completely agree with you in your rejection of the right of any group to arrogate to themselves the sole interpretation of the Quran. The Quran, being a book containing divine knowledge and wisdom, can only be understood progressively. It has to be interpreted anew by every generation and through a scientific methodology. Your effort is praiseworthy. Well done. Keep it up. – KASSIM AHMAD, former president of Malaysian Socialist Party and head of Malaysian Quranic Society who was declared apostate by religious authorities for his controversial work on the Prophetic Traditions.

This translation is the best tool for those who want to understand the uncorrupted Message of Islam – justice and peace. This translation shows that the Quran is but the confirmation and continuation of God’s system memorialized through Abraham, demonstrated in Torah through numerous prophets, and in the Hebrew Gospel through Yeshu’a/Jesus, the righteous of God. This translation is a message of peace, justice and judgment. I pray that the Reformist translation of the Quran will replace all others not only because it is the best but also because it is the closest to the original Arabic text. – GERSHOM KIBRISLI, theologian and communal leader, The Karaim of the Early Hebrew Scriptures, Holy Land & Benelux. –BrainBowPress